Even though they might not admit it, men feel emotions too: sad, glad, mad, scared; yet anger is the one emotion that is often deemed more socially acceptable. The media and society often project men who are angry as being powerful and more masculine, and men who express sadness as weak.

But anger can hide a more powerful emotion - fear! We all have a bias towards negativity, it's evolution's way of keeping us safe, and research shows that this bias increases in age, particularly in men. Creating what is often described as the 'grumpy' old man syndrome. 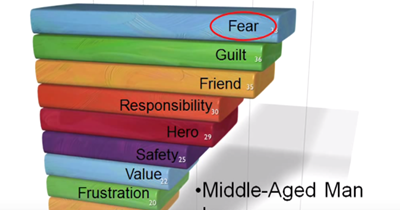 So men are being hit on two fronts:

Edgar Henry Schein, a former professor at the MIT Sloan School of Management, developed a model that illustrated how we can fall into perceptional traps. Here’s how it works…

Typically, when faced with a predicament, the human psyche follows a pattern:

However each stage is potentially limiting and biased depending upon our own point of view:

You don't need to be frightened to speak to us

Want to talk branding? Say hello, and let's have a chat